End of an embodied era


December 3 marked what is in all likelihood the final time that I will teach ‘Embodied Cognitive Science’ (Psyco 457) at the University of Alberta. I’ve had substantial difficulty keeping the enrollment in that course up, and decided a few months ago to teach an introductory Cognitive Psychology course instead of it next year.
The course itself has a long history. It emerged from a (failed) attempt to establish some interdisciplinary cognitive science graduate courses in the late 1990s. (This explains why this course has always met in the evening – this was the only time that students from four different Departments had in common.) As graduate enrollment in that course (INT D 554) fell, it was double-numbered as an undergraduate course, and I began to introduce LEGO robots into its curriculum. It was then offered (perhaps in 2001) as PSYCO 403.
The course had some important developments over the past two decades. I received a McCalla Research Professorship in 2007 to integrate the course with my research. This led to the publication of a 2010 book on using LEGO robots to study embodied cognitive science. In 2013 the course received its current 457 designation.
Over the years there has been a fair number of students who have worked through the course, developing some very interesting robots and learning to write papers about embodied cognitive science. One interesting success story is my current graduate student Arturo Perez. Arturo stayed in Edmonton for a few months 7 years ago to learn about teaching cognitive science with robots, and transported those skills to Chile. One reason that he is back in Edmonton for graduate studies is because of his experience with this course.
The final edition of the course was very successful. Students developed a ‘functionally equivalent’ Grey Walter Tortoise over the term. The final class involved exploring the behavior of three of these machines as they interacted with their environment (and with each other). The images below reflect various stages of this project. The index cards scaffolded the students’ building, programming, and tweaking of their machine. The inventors of this machine pose with their work in the second photo. A still of robots in action is provided in the third photo. The last photois a fabulous time-lapse photo taken by Arturo illustrating robot behavior in a fashion very reminiscent of William Grey Walter’s own work. 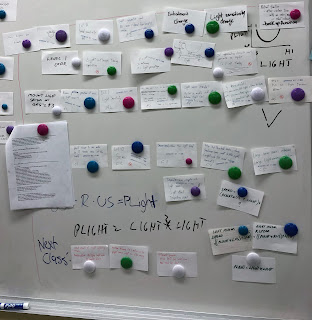 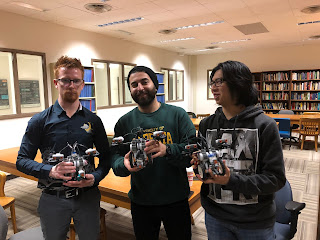 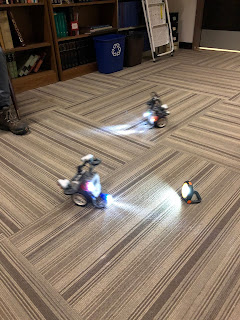 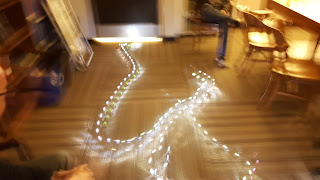