Last month I blogged about my practice of teaching cognitive science, “Not Just the Facts: Teaching Cognitive Science”, a post that arose in the context of discussions about the future of postsecondary education in Alberta.  Of course, the spark for these discussions was the postsecondary funding reduction announced in last month’s provincial budget.  Recent news leads me to revisit this blog from a slightly different perspective.


Thomas Lukaszuk, deputy premier and minister of enterprise and advanced education, was in Lethbridge recently for the installation of the new president and CEO of Lethbridge College.  The Lethbridge Herald reported on his visit.  One part of its account discusses the minister’s thoughts about the Campus Alberta initiative:


"The vision is such that we will have a Campus Alberta where we will have 26 schools allowed to grow and be individuals but share their best practices with all other schools," he said. Any institution that develops unique curricula would put it into a provincial depository where all other schools could use it. As it stands now he said institutions develop the same curricula at the same time without considering other input.


This discussion of a provincial depository of unique curricula certainly caught the attention of the people discussing #abpse on Twitter.  More than one expressed the belief that professors who design courses possess these creations as intellectual property.  Some argued that this approach would fail because courses necessarily change from term to term. I am sympathetic to these positions, but they were not my first reactions when I read the article.


Instead, I considered this vision of Campus Alberta from the perspective of my own course creations.  In my blog last month, I mentioned my “Embodied Cognitive Science” course, in which students learn about the foundations of embodied cognition.  Students hear me lecture, but also write, discuss, and build their own LEGO robots. This course is certainly an example of ‘unique curricula’.  To my knowledge, my approach in this course is unique to Alberta, not to mention Canada.  While a provincial depository is not yet available, most of my course materials are online.  The web page for the course includes lecture material, as well as links to robot building instructions, example programs, and sample videos of our LEGO robots.  A free pdf version of one of the texts for the course (From Bricks to Brains: The Embodied Cognitive Science of LEGO Robots, 2010, Athabasca University Press) is available from the publisher under a creative commons license.  Given all of this online information, one wonders why clones of this course are not popping up everywhere already!


I suspect that I know the answer to this question.  At a key moment in the motion picture Marvel’s The Avengers, the Black Widow informs Loki that she has “a very unique set of skills”.  I do too – albeit without the good looks and the fetching uniform.  Students do not take my course because of the freely available course materials and text.  Instead, they enroll to take advantage of my unique expertise.  Students ask questions, and they want them answered by someone who is ‘in the know’.  A postsecondary course provides the opportunity for dynamic conversation between students and instructors.  A course is not merely a curriculum to deliver.


Consider a recent and extreme example of a student needing to interact with me, instead of just with my available course materials.  This past fall my wife and I hosted Arturo Pérez, a senior undergraduate psychology student at Universidad Diego Portales in Santiago, Chile.  Arturo spent three months working in my lab, and sat in on two of my cognitive science courses.  Officially, the goal of his visit was to establish collaborative ties between my laboratory and the Centro de Estudios de la Argumentación y el Razonamiento (CEAR) at UDP.  Unofficially, Arturo’s goal was to obtain as much knowledge as possible about our Albertan approach to cognitive science.  He accomplished part of this goal by working in my lab as he created, programmed, and tested a LEGO robot for sorting objects (a model ant).  This work was excellent; it will appear in an undergraduate research journal, and a video of his robot in action is available here.  He accomplished the rest of his unofficial goal via many kitchen discussions with me at my home, several of which involved brainstorming and evaluating technical ideas.  (There was cultural exchange too.  Arturo experienced our home-style Canadian cooking, and saw Rush in concert.  He introduced me to the wonders of the Chilean spice merkén and the British band Porcupine Tree.) 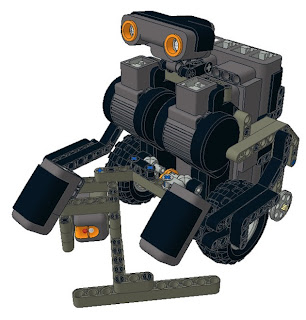 The point of this example is that Arturo was already familiar with my embodied cognitive science curriculum before he visited.  Prior to coming to Edmonton, he perused my web site, he read our (free) book, and he even created and posted a video of his version of one of our robots, the Wormeostat.  However, his exposure to my curriculum was not enough.  He needed to visit my lab and courses to learn from conversations with me.  I believe that our give-and-take interactions concerning a variety of robot design and programming decisions provided him with a much keener sense of the subtleties of embodied cognitive science than he could have achieved from reading our book alone.


Similarly, I know that my discussions with Arturo about his project sharpened my own thinking about how our robots illustrate embodied cognitive science.  Arturo did some fabulous things with the robots that I had never explored!  I mentioned earlier that I agreed with those who pointed out that courses change from term to term.  There are other important dynamics at play.  There is the dynamic of the interaction between student and instructor, which in turn affects the knowledge of all the participants.  Instructors develop, too, during a term – pushed by student questions and conversations, and by our own attempts to tailor course concepts to reach our students.

A provincial depository of unique curricula will not result in institutions sharing or copying courses, because it is impossible to share the unique skill sets of the instructors who develop these courses, skill sets that continually develop as academics discover and disseminate knowledge.  I do not believe that it is possible to clone my courses – unless someone finds a way to clone me or at least a way to duplicate the knowledge that I have acquired and which I use when I interact with my students.
Posted by Michael R.W. Dawson at 21:40