Writing and the Dictionary of Cognitive Science


Writing, however, is an activity that requires a great deal of practice.  There are times when one cannot write during a research project – for instance, when a project is just starting or is ongoing, and you do not have any results to write about!  How do you keep your writing habits sharp in such lean times?


I try to keep in the writing habit by taking on projects that permit me to write when the need arises, but which can be left alone when other kinds of writing projects are put on the ‘front burner’.  One of my most important tools for maintaining my writing habit is the University Of Alberta Dictionary Of Cognitive Science.  It is a perfect writing project, because it can be left dormant for long periods of time.  When the need arises, it is easy to extend, because you simply find terms that can be defined, and which do not currently have a definition on the site.


This Dictionary of Cognitive Science is simply that: a web resource that provides brief descriptions of terms that are related to cognitive science in one way or another.  Most descriptions in this dictionary talk about a term in a paragraph or two, and provide a handful of references.  The Dictionary is organized alphabetically, and is also searchable.  It currently has entries for 373 terms, beginning with ‘abecedarium’ and ending with ‘z-lens’.  Since June 12, 2012 I have been tweeting links to its entries, in random order, every weekday as a ‘cognitive science word of the day’, or #cogsci #wotd.  I will have exhausted this list sometime by the end of 2013, and will have to add more definitions to continue this practice!


The Dictionary of Cognitive Science began as a class writing project.  Students in a graduate course on cognitive science wrote a handful of definitions, and I posted these definitions on a website that was being delivered by a lab SPARCstation.  One of my former graduate students, David Medler, wrote some routines for searching and posting on this website; David and I even published an account of this as a pedagogical activity (Dawson & Medler, 1999).  The current version is maintained as an Adobe Dreamweaver site on my office desk machine, and is served out on a new Linux box that is housed in my basement lab.


The Dictionary started as a class writing exercise, but it soon took on a life of its own.  It turned out that a lot of people were connecting to it.  As a result, I began to feel a responsibility to grow it, and to clean up entries in it that I felt were substandard.  I started this phase of the project in 2009.  In addition to editing existing entries, I added new entries related to material being moulded into a book on LEGO robots and embodied cognitive science (Dawson, Dupuis, & Wilson, 2010).  After another hiatus, another set of terms were added while I was writing my current book on the foundations of cognitive science (Dawson, 2013).


While the Dictionary of Cognitive Science exists as an internet resource, its control structure is a narrow plywood bookshelf that is slowly being filled with hundreds of index cards.  This physical instantiation of the Dictionary stands in my office, as shown in the image below.  The writing process proceeds as follows:  First, I scan through the Dictionary, looking for terms related to my current work that have no entries, or looking for terms that need to be revised.  For each term that I could create or revise, I write the term on an index card.  Second, I take a handful of these cards home, and spend a while writing an electronic version of a definition for each.  Third, I create a page for each new term in Dreamweaver, and update the required links in the website that permit the new definitions to be indexed.  At this time I stamp a ‘completed’ date on the index card of each definition that has been created.  I then upload the updated Dictionary to the server, and am ready to post the new entries on Twitter, one day at a time.  With every post, I stamp a ‘posted’ date on the index card, and then place the card on its alphabetized shelf in my office. 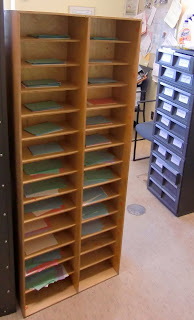 As the fall term comes to an end, I will have run out of current Dictionary entries.  Fortunately, I am working on a couple of new projects (relating neural networks to Bayes theorem, and a book about interpreting the internal structure of neural networks trained on musical tasks), which will serve as a source of (needed) new material for the Dictionary of Cognitive Science.  I am stocked up on index cards, and ready to write new definitions to keep the rust off my writing while I collect new data on these new projects.