On October 9, the Premier of Alberta and the Deputy Premier (who is also minister of Enterprise and Advanced Education) visited the University of Calgary to make a major announcement: the government is contributing $142.5 million for U of C to expand its Schulich School of Engineering.  When the expansion is completed, there will be room for 400 additional engineering students.


On the one hand, this should be a ‘feel good’ story: this is a good result for that university, and it is good for the government to channel substantial funds back into the postsecondary system.  Accordingly, the government press release is filled with positive quotes.


On the other hand, Twitter exploded with many negative reactions (see figure below).  People were outraged that the government promise to U of C was nearly identical to the funding that it cut from postsecondary institutions in its spring budget.  There was a general outcry about favoritism: Calgary versus the other institutions in the province, engineering versus arts, and so on.  After all, the University of Alberta had just announced a mass departure of 121 employees, including 77 professors, due to a voluntary severance program that was instigated as a result of budget trouble.  Perhaps the optics of the announcement could have been better!

This is not to say that there was not a great deal of work creating positive photo opportunities at the announcement.  Pictures of dignitaries interacting with engineering students and their gadgets quickly appeared on social media.  I enjoyed the ‘thank you’ photograph that appeared on the Flickr feed of the Premier’s office, which is reproduced below.  Unless it is typical for school children to be milling about the U of C grounds wearing colorful ‘Future Engineer’ T-shirts, this photo was definitely … engineered! 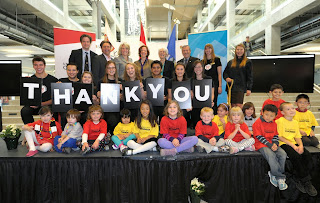 I was particularly interested in the photograph of the Deputy Premier looking at some LEGO NXT robots displayed by engineering students.  It seems that the skills required to design such machines are appropriate in our current context of enterprise and advanced education. 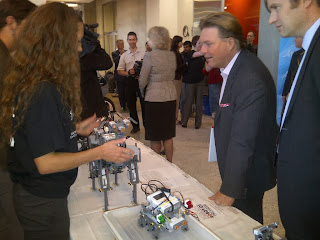 Why did I pay particular attention to this photograph?  Because the evening before it was taken, students in my PSYCO457 “Embodied Cognitive Science” course built their own robot, a Braitenberg Vehicle 2.  After constructing the robot, they observed its behavior and manipulated its design.  Next week they will alter the robot’s program to further their explorations.  Of course, I took advantage of all the activity to generate my own publicity shots.  The three photos below depict this year’s batch of students in the process of building, 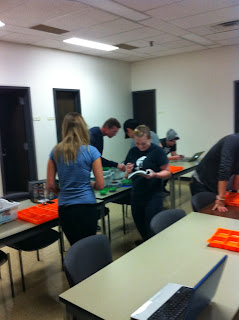 the machine that they built (three were constructed), 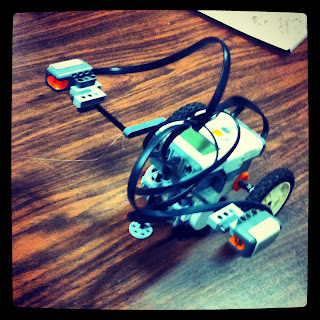 and students experimenting with their creations. 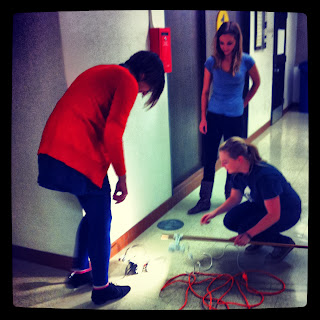 Students in this course are typically psychology majors, some in the Faculty of Science and some in Arts.  (This year one is an English major, last year one was a Philosophy major).  The course’s current structure was developed a few years ago when I had the opportunity to meld my research with my teaching thanks to a McCalla Professorship that I was lucky enough to be awarded – from the Faculty of Arts.  A hint of why psychology students, arts majors, or philosophers can learn something from building robots is provided in a video that I made and posted on YouTube. (Yes, I know – a flagrant video-op!)  The last segment of that video is available here, and is most relevant to my point; other segments from that web page illustrate many robots designed by students for that course.


he irony in all of this – to get to the point of this blog entry – is that none of my students in this course are engineering majors.  If you look beyond the engineering buildings at any university you will be surprised at the diversity of skills and ideas that students are being exposed to!