Coltrane Changes on the Ukulele

As described in this previous post, the  text below is a draft of one of several "interludes" to be included in a book that I am working on concerned with music and artificial neural networks.

Figure I-14. The most basic ukulele chords for the ii-V-I progression in the key of C major.  See text for details.
When investigating musical problems with artificial neural networks, I find it useful to hear the stimuli on a musical instrument.  While I have spent a lot time working out stimulus patterns on the keyboard of my piano, these days my instrument of choice is the ukulele.  In this interlude I will provide the chords that I use to play the Coltrane changes in the key of C major, developing this chord structure from variations of the ii-V-I progression.
Figure I-14 provides the three chords that define the simplest version of the ii-V-I progression on the ukulele.  Each chord diagram illustrates the four strings of the ukulele, and the dots on the diagram indicate the fret at which each particular string is depressed.  The three chords that are presented are based on the assumption that the progression involves a sequence of three triads (D minor, G major, and C major).  That is, if one creates these three triads using only the notes available in the C major scale, then one of these chords is necessarily minor, while the other two are major (see the discussion of Figure 7-15).
The ii-V-I progression is a staple in jazz, and using triads doesn’t provide the jazziest sound.  Jazz musicians are more likely to extend the triads used to create the Figure I-14 chords to create tetrachords.  This extension, which involves adding an additional note to each chord from the C major scale, was also illustrated earlier in Figure 7-15.  Figure I-15 illustrates how one would play the C major tetrachords for the ii-V-I on the ukulele.  Note that the D minor has now become a D minor seventh, the G major has become a G dominant seventh, and the C major has become a C major seventh.

Figure I-15. The ukulele tetrachords for the ii-V-I progression in the key of C major.  See text for details.
All of the chords illustrated in Figures I-14 and I-15 are called open position chords.  This is because at least one ukulele string in the chord is open; that is, it is not pressed down by a finger.  The advantage of open position chords is that they generally are easier to play.  The disadvantage of such chords is that they are special in the sense that they cannot be moved up or down along the ukulele fret board to play the same type of chord in a different key.  This makes these chords different from the closed form chords that were the topic of the previous interlude “Ukulele Chords and Perceptrons”.  Our next move is to transform the Figure I-15 progression into one that uses closed position chords.
In order to perform this transformation, we will use two different tricks.  The first is to replace the Dm7 and Cmaj7 chords with alternative fingerings that can be found in a decent ukulele chord book (Johnson, 2005).  For these two chords we pick two fingerings that are related; both are barre chords that involve pressing the index finger down across all the strings at the fifth fret.
The second trick is to take advantage of chord substitution.  In general, jazz musicians see a chord’s name as an indicator of potential chords.  For instance, when such a musician sees that a G7 is the next chord, they would feel perfectly comfortable with substituting a different, but related, chord.  Chord substitution conventions permit G7 to be replaced, for example, with G9 or with G13 in order to add musical variety.  We will choose the G9 chord because the barre form of this chord places it in a similar position on the fret board to the other closed form chords in the ii-V-I, as is illustrated in Figure I-16. 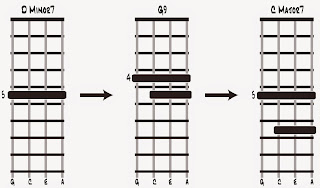 Figure I-16. Closed form ukulele chords for the ii-V-I progression in the key of C major.  See text for details.
There are three important points to make about Figure I-16.  First, the particular chord choices that it illustrates begin quite a bit further down the fret board (at either fret 5 or 4) than was the case in Figures I-14 or I-16.  Each chord diagram has a number on the left indicating the starting fret, and the chord diagrams have been extended more than is typical to show where on the ukulele each chord is being played.
Second, the G9 chord that is illustrated is not likely to be found in many ukulele chord dictionaries.  This is because this form of the chord does not include the root note G.  Instead, it uses the other four pitches that are part of G9.  These four pitches actually define a minor seventh (flat fifth) chord in a different key.  G9 as illustrated in Figure I-16 is also Bm7♭5.
Third, because these three chords are all in closed form one can move these patterns up or down the fret board to play the ii-V-I progression in a different key.  For instance if one uses the same chord patterns illustrated in Figure I-16, but moves each upwards a fret (towards the top of the page), then the result is the ii-V-I progression in the key of B major.
As detailed in Chapter 9, the Coltrane changes elaborate the ii-V-I progression by using the same three chords in Figure I-16, but also adds four additional chords that serve as lead ins.  We can create the Coltrane changes by adding these four chords to Figure I-16, attempting to choose closed form chords that minimize movements along the fret board.
The Coltrane changes for the ukulele in key of C major are presented in Figure I-17.  Each chord is a barre chord, meaning that this figure defines chord patterns that can be shifted to different fret board positions to generate the Coltrane changes in a different key.  For example, shifting each chord a fret downwards (towards the bottom of the page) produces this progression in the key of C# major.

Figure I-17.  Closed form ukulele chords for the Coltrane changes in the key of C major.
Creating the chord patterns in Figure I-17 serves the primary purpose of permitting me to play the Coltrane changes on the ukulele.  However, this set of chord diagrams suggests other uses.  One of the themes in Chapter 9 was exploring different encodings of jazz progressions for networks.  One could imagine adapting the encoding developed in the interlude that preceded Chapter 9 to present the jazz progressions to networks as sequences of ukulele chords.  What effect might this representation have on network complexity?


Similarly, Figure I-17 raises the possibility of generating alternative versions of the Coltrane changes for ukulele.  For instance, might easier chord fingerings emerge if one explores chord substitutions for the other dominant seventh chords in the figure?
References
Johnson, C. (2005). Hal Leonard Ukulele Chord Finder. Milwaukee, WI: Hal Leonard Corporation.
Posted by Michael R.W. Dawson at 17:24