In the 1920s, Arnold Schoenberg invented a technique, called dodecaphony, for composing atonal music.  Atonal music has no discernible musical key, because all twelve notes from Western music occur equally often.  In dodecaphony one begins by arranging all twelve notes in some desired order; this arrangement is the tone row.  One then takes the first note from the tone row to use in composing a new piece.  The composer chooses the duration of this note, and decides whether to repeat it.  However, once the use of this note is complete, the composer cannot use it again until all of the other eleven notes in the tone row have also been included.


In this blog, I explore an alternative approach to composing atonal music.  This technique uses ‘strange circles’ as sources of notes for a musical composition.  Strange circles are representations of musical notes that we have discovered in many networks that we have trained on musical classification problems.


First, I will briefly state what strange circles are.  Then, I will explain how I used them to generate the notes of a musical score.  I am going to provide that musical score, and also provide some sound files that illustrate the completed piece, as well as the components from which it was constructed.  If you are not interested in the details of my method, then feel free to skip to the end to hear its results! (Links are in the text, but are not evident in some browsers.  So, I have also set aside the links at the end of this post.)


Most students of music encounter a device called the circle of fifths.  It arranges all twelve notes from Western music in a single circle; adjacent notes in this circle are a musical interval of a perfect fifth (or seven semitones) apart.  This circle helps determine the number of sharps or flats in a key signature, or guides chord progressions in jazz. 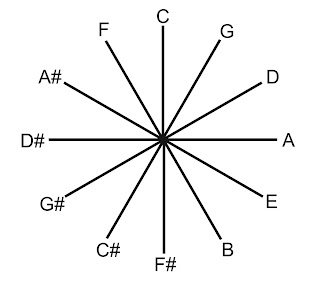 The Circle of Fifths


Other circular arrangements of notes are possible that separate adjacent notes using musical intervals different from the perfect fifth.  These are ‘strange circles’ because they are not typically taught to music students.  When my students and I train artificial neural networks to classify musical chords, and then examine the internal structure of the trained network, we often find that the network assigns notes to a variety of strange circles.


For example, we often find that networks employ two circles of major seconds, both shown below.  In each of these circles, adjacent notes are a major second (or two semitones) apart.  With this separation between notes, one circle captures half the notes in Western music, and the other captures the other six notes. 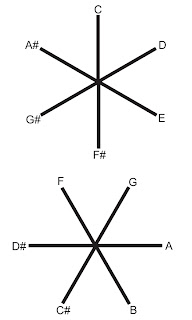 
We also frequently discover the four circles of major thirds in our networks; all four appear below.  In each of these circles, adjacent notes are a major third (or four semitones) apart.  With this separation between notes, one circle only captures a quarter of the notes in Western music.  As a result, four difference circles are required to represent all of the possible notes. 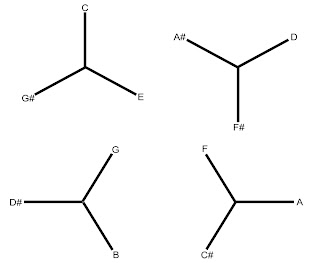 
Why do networks use strange circles to represent musical structure?  One reason is that networks discover that notes that belong to the same strange circle are not typically used together to solve musical problems, such as classifying a musical chord.  Instead, the network discovers that combining notes from different strange circles is more successful.


My hypothesis led to action.  I created a six-voice piece of music, in which a strange circle provided the notes of each voice.  I used each of the six strange circles illustrated above.  To choose a note for a staff, I randomly selected a note from its strange circle.  (This move is also consistent with our network interpretations: networks treat each note from the same strange circle as being exactly the same note!)


I made three additional musical assumptions.  First, while each wheel generated a note name, I decided how high or low (in terms of octave) each note was positioned.  Second, I added a rest to each circle, so that at a randomly selected moment any strange circle could be silent.  This was to provide some musical variety.  Third, in order to ensure that all notes occurred equally often in the score, I sampled the two circles of major seconds twice as frequently relative to the other four strange circles.  That is, I used the circles of major seconds to generate four quarter notes per bar, while the other four circles were used to generate two half notes per bar. The score generated from the ‘strange circles’ in this fashion consisted of 14 bars.  Its first four bars are below; a pdf of the entire score is available here. 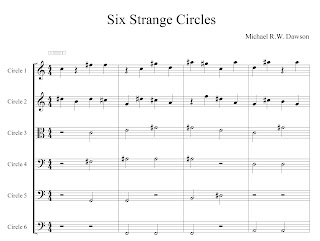 
Of course, the full composition involvescombining the notes of all six circles simultaneously.  I was surprised at its musicality.  My impression of this piece was that it is a modern, atonal composition.  I am no Schoenberg, but I humbly submit that composing music by combining strange circles provides an interesting and alternative method to dodecaphony.