The last few days have been difficult for post-secondary education in Alberta, and many challenges and changes are imminent.

Substantial cuts to university operating grants were announced in the provincial budget on March 7.  There are ongoing discussions about how to implement budget cuts across institutions, faculties, and departments.  There is pressure from the minister of Enterprise and Advanced Education for institutional reorganization.  Researchers sense encouragement of applied research, and discouragement of “curiosity driven” research. Students, faculty, and staff are marching on the legislature.  Coffee with some of my younger colleagues includes mentions of exploring opportunities elsewhere.


Not surprisingly, some of these discussions are online.  Many can be found by searching Twitter for the hashtag #abpse.  The minister, Thomas Lukaszuk, contributed to this Twitter feed by posting a link to a YouTube video that provides “An Open Letter To Educators.”  The minister simply aksed “Interesting – what do you think?”  In the video, a former University of Nebraska student argues that universities are in the business of communicating facts to students, but now the internet makes facts free.  Universities have to adapt to this reality or die.  His university experience – with large classes, powerpoint lectures, fact memorization and regurgitation, and professors not interested in even learning student names –led him to drop out.  Presumably, he could find better facts (for free) using his web browser or smart phone.  His point is that if the goal of a university education is memorizing facts, then it is a waste of time and money.


I have a lot of different reactions to this video, but the most straightforward is simply that its creator missed the point of a university education.  As a professor, I am not in the business of uploading facts to student brains.  Instead, my goal (as advertised in my teaching dossier)  is to create an environment in which students learn by building – reading, discussing, writing, programming, simulating, experimenting – as they explore the exciting interdisciplinary ideas at the foundation of cognitive science.


One easy example of putting this teaching philosophy into action is my fourth-year course on embodied cognitive science.  Sure, this course involves me lecturing.  It involves more than this, though.  Students get hands-on experience with behaving agents by building a variety of robots out of LEGO Mindstorms components.  They use these robots to explore how very simple agents can generate surprising and complicated behavior when embedded in the real world.  Building on lectures and hands-on activities early in the course (where students learn about and construct our versions of some famous robots), by the end of the course students create, study, and document their very own robot projects.  Examples of student projects in the most recent edition of this course are online; these videos (not to mention the robots and their programs) were student creations.  (I even took the time to learn all of the students' names.)


A more recent example involves my PhD student and two senior undergraduate students, both taking independent study courses with me this year.  All three students have been involved in lab activities, and the fruits of these labours appeared at the recent Joseph R. Royce Research Conference hosted by the Department of Psychology at the University of Alberta.  All three students (seen in the image below) gave their first poster presentation at this conference.  Of course, this required them to be involved in the research, as well as the poster preparation.   More importantly, at the conference itself the students engaged in conversations with conference attendees about the work on display and about why it is significant.  You learn a lot about your own research from conversations of this type, both by learning how to present it, and by dealing with a variety of unanticipated questions!


The two examples above are from my direct experience, and I could provide many others from my own experience as a professor (and in my earlier years as a student!).  I am not in a position to make general claims about the state of university education, but I do not believe that I am an exception to the rule.  Many other instances can be found in my own department (there were many undergraduate and graduate students presenting posters and talks at the Royce conference), and in all of the other departments at my institution.  If this was not generally true at most universities I would be astonished. 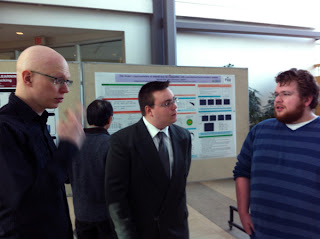 Brian, Sheldon and Josh at the poster session of the Royce conference
Posted by Michael R.W. Dawson at 16:00